Here Goes Nothing by Steve Toltz 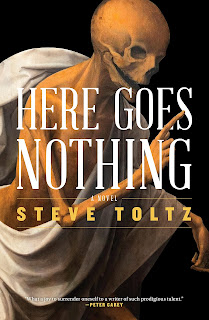 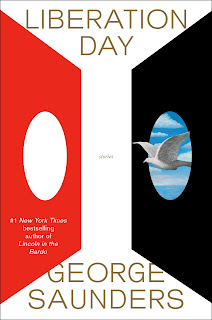 The story "Love Letter" is worth the price of admission alone. Not blown away by anything else, some retreads of his earlier theme-park-as-existence m.o.
at November 10, 2022 No comments: 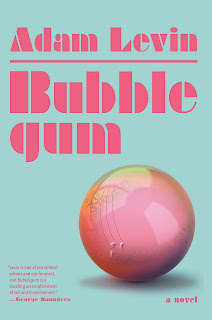 Another strong, fascinating, disturbing, sometimes annoying work.
Check in: halfway through. Deeply annoying. Levin goes on deep dives that are remniscent of DF Wallace but he lacks DFW's genius. The middle section of manuals, case studies, video descriptions about caring for the robotic pets that are the central theme of the book -- is just deadening.
On the other hand, the long two letters from a mother to her son as she is dying of cancer, and about to overdose to end her pain are absolutely breathtaking.
at November 01, 2022 No comments: 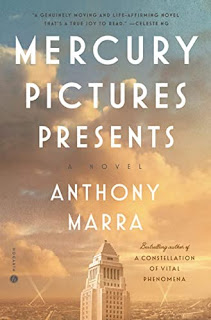 Well, it seemed to go on forever, but I got through it. Terribly overwritten, in my opinion, not just in the prose but in the jarring shifting points-of-view and flashback/forwards. I thought A CONSTELLATION OF VITAL PHENOMENON was so tremendous that I opened this novel with trembling hands. He's gifted - and the story was intriguing and intricate - but the structure was not great. Reading CHRIST STOPPED AT EBOLI at the same time - one of the many texts Marra acknowledges in his afterword - couldn't have helped, as EBOLI is a masterpiece of concision and beauty.
at October 05, 2022 No comments: 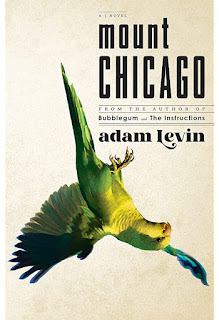 Extraordinary, and extraordinarily weird, story. Funny and sad. And weird. Levin riffs and raffs hilariously. It's a book about his mind more than it is about Chicago. But marvelous.
The consciousness and point of view of Gladman's parrot Gogol were particularly outstanding. Everything you wanted to know -- and much much more --about parrot sexual reproduction is explained [362-363].
That there were basically only two things to fear: flocklessness and death. [247]
Penguins having oral sex: cloachalingus.
at October 05, 2022 No comments: 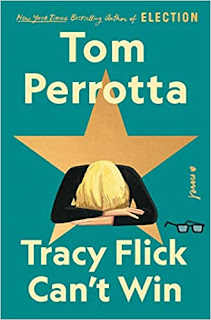 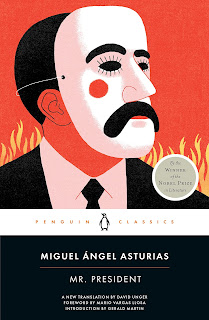 Astonishing hidden-Modernist novel written in the 1920s by the Guatemalan Miguel Angel Asturias, but only published after political exile in 1946. One of those books that might have made a different historically had it been published in its own time.
Cesaire described Asturias as "a mountain perennially green, on the horizon of all mankind. [xiv]
The prisoners continued walking by. To be them, and not to be the onlookers so happy not to be prisoners. [xxix]
"I'm the Apple-Rose of the Bird of Paradise, I'm life, and half my body is a lie, the other half truth... I am the lie in every truth, the truth of all fiction.' [19]
"You'll either die or go blind reading." [17]
"Sir, he couldn't bear the two hundred lashes because he died first. "[30]
She took comfort in remembering her son. She imagined him still in her womb. Mothers never completely empty of their children. [102]
When fingers tremble bonelessly, hands shake like gloves. When jaws tremble, unable to speak, they telegraph worry. When legs tremble, someone is standing up in a carriage harnessed to two runaway horses like souls the Devil is about to usurp. [108-109\]
"Love, my girl, is a cherry snow cone. When you start eating, there's tons of red syrup and you're happy. Then it drips all over and you've got to lick it before the top tips over. Then you're left with a tasteless, colorless clump of ice." [112]
You would fit perfectly
In the keyhole of heaven:
The locksmith carved your body
On a star, on the day you were born. [115]
at August 22, 2022 No comments: 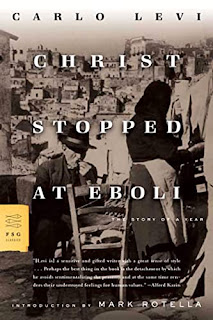 Where do I start about this remarkable book? A political prisoner in Italy, a doctor and painter, in 1942-1943 is sentenced/banished by the fascist Mussolini regime to a remote peasant region in the southern part of the country. Whereupon he makes notes for an anthropological, social history of the region and its people. The peasants' superstitions and conduct are vividly conjured.
"We're not Christians," they say. "Christ stopped sort of here, at Eboli." "Christian," in their way of speaking means "human beings." and this almost proverbial phrase that I have so often heard them repeat may be no more than the expression of a hopeless feeling of inferiority. We're not Christians, we're not human beings; we're not thought of as men but simply as beasts, beasts of burden, or even less than beasts, mere creatures of the wild. (p. 3)
tax collector who is also a clarinetist (35)
disgraced priest (40-41)
The mayor and schoolmaster was at this moment exercising his teaching function. He was sitting on a balcony just off the classroom and having a smoke while he looked at the people in this square below... He had a long cane in his hand, and, without moving from his chair, he restored order within by striking through the window with astonishing accuracy... (44-5)
public latrine built by fascists - no function (46)
man who inflates dead goats to strip the skin and make flasks of it (46-7
drawing room cut up into dark prison cells (50)
two political prisoners who take turns cooking lunch for each, and setting it out - but who are not allowed to see each other and fraternize (51-2)
He was on obese, heavy, deaf old man, greedy and grasping like an enormous silk-worm. (59)
the peasants relationship to the state (76-78)
shitting outside (96)
Giulia physical description: Her face as a whole had a strongly archaic character, not classical in Greek or Roman sense, but stemming from an antiquity more mysterious and more cruel which had sprung always from the same ground, and which was unrelated to man, but linked with the soil and its everlasting animal deities. (105)
at August 22, 2022 No comments: 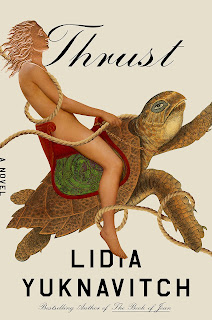 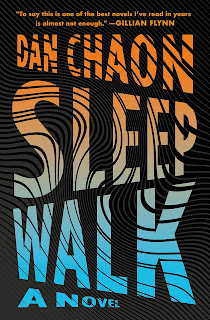 Sometimes animals and machines look more human than people do. 30
at August 13, 2022 No comments: