"Do Nothing Marvell Would Not Do": Remembering Professor Mary Kinzie 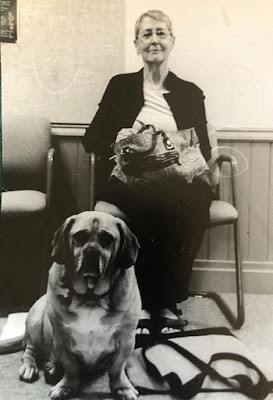 [In May of 2019, I was thrilled when my friend and Northwestern University Department of English Senior Lecturer Brian Bouldrey contacted me to ask if I would write a short memoir about studying poetry with Professor Mary Kinzie, who would retire that month.]

In 1980, almost 40 years ago, I studied with Mary Kinzie for two short years. But her effect on my life and my writing has been astounding, though: she asked the right questions of me, and challenged me, and pointed me toward many poems and poets who have been right here with me almost every day since then.

When we read Elizabeth Bishop, I transcribed inside the cover of my The Complete Poems Mary’s suggestions for what to keep in mind: Note her use of the conjunction “and”;  how she immediately establishes a visible landscape and is extremely descriptive, but how her outrageous images are meant to help readers, not to show off; how she absolutely finishes a thought; her “refusal of the literary”; how she uses repetition to glue herself to an idea; her childishness, her self-correcting style, her good manners.

The seeds she planted in me grew up – she might be appalled at how the plant has tilted, and some of the colors and shapes it has taken on – but I consider her the monumental mover of my mind during my undergraduate years.

I was attracted to form but at 19 years old was a firm communicant in the Church of the Romantic Ejaculate – my writing was holy, and the poem as first-struck was a sacred relic and to be preserved as such. Mary taught me how form flexed but must be cared for; to revise with intent; to change what the draft poem was not, in most cases, in my eager and largely dreadful work; to finish a thought or moment or abandon it; to be deadly efficient and finely honest.

She was stern and brilliant and methodical, but also had a pungent, memorable wit, particularly in her written comments: I remember from her daily poems assignment list for three Marvellian-tetrameter stanzas: “Formally, do nothing Marvell would not do.” “The danger of alliteration, according to Gross, is ‘consonantal clang.’” Her note on my Auden imitation was, “You’ll have to have a clearer plot (i.e., mythology) and an array of details more telling (and more easy to stick into an iambic pentameter line) than a DISHWASHER.”

But she taught me to expect more of myself, as she always did: she noted on my journal entry on a Yeats poem, “You should be cross with yourself over this irrelevant entry.”

I determined to do everything she said to do, even if I couldn’t understand very much of it. It was like learning a tricky piano piece: you just kept going through it again and again, and note by chord by bar, it improved, and your hands warmed to the pleasure of your ears hearing the code in front of you begin approach the sound you wanted.

After I left Northwestern, I continued to pay attention to Mary: via her volumes of poetry, her reviews in APR, and eventually in her collected criticism and essays, her epic A Poet’s Guide to Poetry. In the back of Summers of Vietnam I scrawled the words I had never heard before: tarn, fardels, chitin, faience, morrices, tmesis, clerestory, colfox, cok brake, calor, ghostwheat. She refused to stop teaching me, from a distance.

I watched her own formalism retreat over time, but the poems expand and astonish me with their emotional and narrative effect. “Reading an Old Poem of Mine” and “Lunar Eclipse”– I almost memorized them. Again, it was mostly beyond me, but I kept writing, thinking, reading:

I tear back all I know till I don't know it,
and I can see the jagged
flicker at the core
prior to understanding,
tearing thought down into pieces
that sit about oddly under a different light,
strange, hard, anonymous.
(from “Lunar Frost” by Mary Kinzie)

At the same time, I partly blame Mary’s rigor for driving me away from anything to do with academic study. My lazy soul took ten years to go back and get my MFA. During that time, something loosened in me, in reaction to Mary’s exercises: my mind was suddenly brimming with unassigned poems. But even as I started drifting from formal verse, something had also tightened: there was always a formidable ghost of form.

And my very first published poem in 1988 was a revision of a daily poem syllabics assignment– in 1981 Mary had noted, “This is close to being a perfectly realized poem.” She wanted more in the middle of the poem and a new title – it took me eight years to add two lines and change the title. True to me, it’s about a lazy soul, but true to Mary, it’s well-wrought.

Progressions
Outside the window it is evening.
Since morning I’ve watched the shadows change
From pointing this way to pointing that,
Combing the tall lime grass of the lawn.
It now glows dark olive, still uncut.
I’ve planned all day long what I would do
All day long, so haven’t done a thing.
The temptation to move slides further
Away even as I reach for it.
Perhaps today was not meant for acts
But for the gradual notation
Of shadows that will never return—
Not exactly, at least, as before.

New Age Magazine was pleased to have it, and I hoped they moved plenty o’ vitamins and healing stones as a result. They’d never know how hard it was to write – and how much of what Mary Kinzie taught me in class still clanged clear across the years since I’d seen her. And continues to. Thank you, Mary! And enjoy your redeployment.

Posted by Sean Enright at 10:34 AM No comments:

The Man with the Golden Arm by Nelson Algren 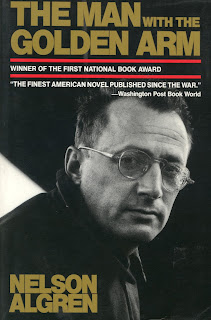 WOW.  It's something of the dialect vernacular of Eugene O'Neill's sea plays, crossed with a muderously serious Damian Runyon, crossed again with the effortless depth of character in Bellow's Adventures of Augie March.

Sophie: If I get any luckier I'll be the luckiest woman in the cemetery. (73)

He was too dear to her: into everything he did she must read some secret hatred of herself. (82)

Violet: So it was up to me to show him he was somebody all by hisself-- that's the first thing a woman got to do for a man. 'N of course there's no sense tryin' to prove somethin' like that standin' up. The least a girl owes herself is to be compfortable about it. (85) 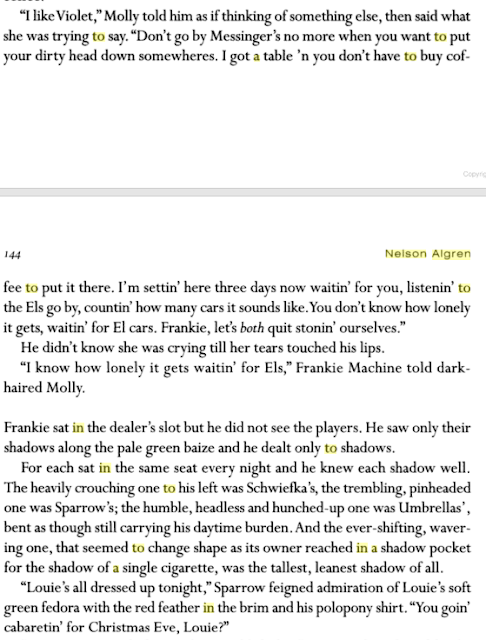 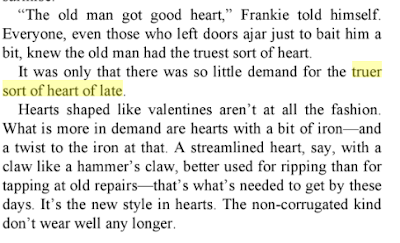 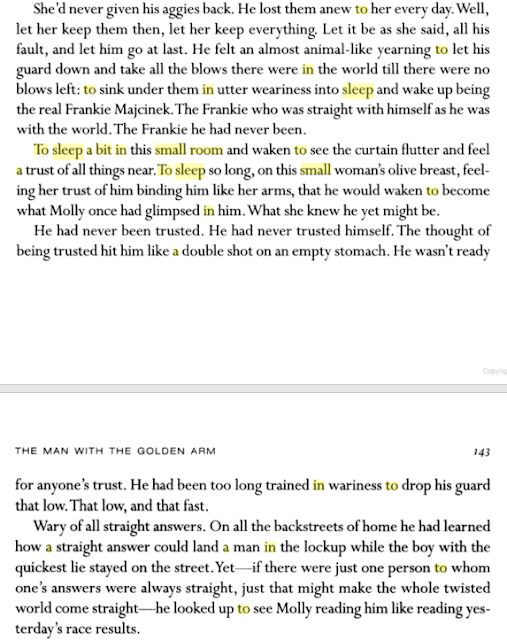 Posted by Sean Enright at 8:46 AM No comments: 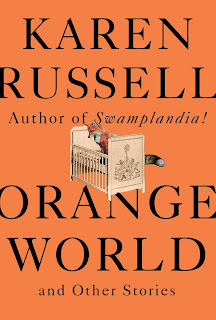 Posted by Sean Enright at 8:41 AM No comments: 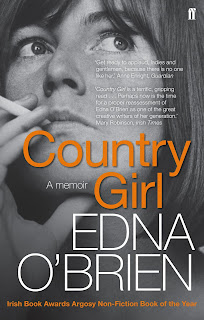 She knew everybody, she did everything, she wrote about most of it.

Feminist, risk-taker, rule-breaker.  Barhopping with Brando and Mailer, dropping acid with Laing.
Posted by Sean Enright at 1:44 PM No comments: 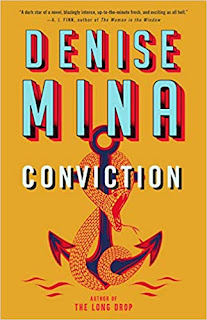 Burned through this in 24 hours.  While not her best book, it's beyond readable and should have been called CONFECTION.
Posted by Sean Enright at 10:20 AM No comments:

Never a Lovely So Real: The Life and Work of Nelson Algren by Colin Asher 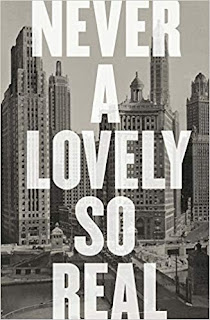 Terrific book on Nelson Algren, his childhood, his meteroric rise in prominence as a novelist, his puzzling retreat as a journalist.

On bullfighting: “It’s always a shutout for the bull.”

We are all members of one another. Algren, The Man With The Golden Gun

Surely never before has any people lived so tidily in the midst of such psychological disorder. Never has any people deodorized, sanitized, germproofed, cellophaned and hygienized itself so thoroughly, and still remained stuck with the sense of something dead under the house. Never have so many two-baths-a-day people gone to so many analysts to find out how to quit washing their hands. Never have so many analysts made appointments with other analysts. How can we be so satisfied that God is on our side, and at the same time be so apprehensive lest he be not?

No other people, I suspect, has set itself a moral code so rigid, while applying it so flexibly. Surely nowhere before has any people possessed such a superfluity of physical luxuries companioned by such a dearth of emotional necessities. Never has any people been so completely at the mercy of its own appliances.
Posted by Sean Enright at 12:06 PM No comments:

Say Nothing: A True Story of Murder and Memory in Northern Ireland by Patrick Radden Keefe 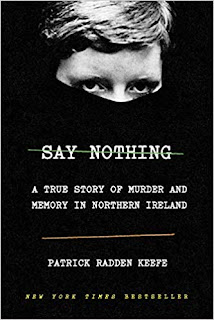 Posted by Sean Enright at 3:09 PM No comments: