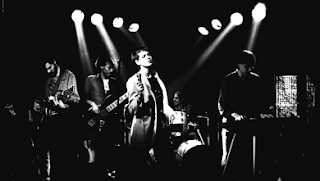 Past blasting. Tiny Desk Unit, a seminal DC new wave band, was recently featured in a Washington Post Magazine story about the old 9:30 Club. I do remember them playing at Columbia Station in 1980 and that I went with my oldest sister Maureen–I also remember being heartbroken over one thing or the other and spending much of the time that night in the car, sullenly smoking cigarettes. Courtesy of the TDU's keyboard players website, I’ve now listened for a good hour – and am struck by how good they are, unlike other bands of that era, like the Insect Surfers (I have a couple IS songs and don't care for them at all). But TDU has a sort of a talking heads funky thing going on (bassist and drummer were black) that I love – and the chick singer sounds like the Slits/Sleater-Kinney.

Fantastic quality video of them from 1981 is here -- http://www.bobboilen.info/Tiny_Desk_Unit_Music/concert_video_files/tdu_hurrah.mov
Posted by Sean Enright at 2:25 PM