The Best Minds of My Generation: A Literary History of the Beats by Allen Ginsberg 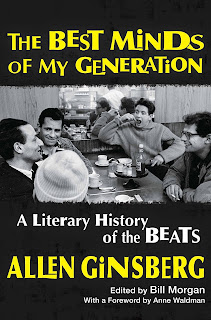 A great primer on the core Beat poets provided by the core of the core himself, Allen Ginsberg.  Oral transcripts of his freewheeling lectures over a 20 year period, the chapters are miniature paraphrases and riffs and memories of the poet and the poem/volume in question.  It's a great way to read the Beats.  Ginsberg's jazzy conversational tone is effective in explicating jazzy conversational poetry and prose.  The chapters on Kerouac (taking up much of the first half of the book) are good, even though at times he just quotes pages of Kerouac at length and lets Kerouac speak.  Kerouac is a fascinating figure -- and clearly enthralling to Ginsberg, who's more than half in love with him, this giant personality who in retrospect seems a sort of doper/speed freak Whitman: are all of his novels and poems really one long piece, like Leaves of Grass?  He certainly revisited and revised and reimagined and renamed and fiddled with his own autobiography again and again.

King Pleasure was interesting because he was one of the few people who took Charlie Parker music and simply took syllables and by following each note he made actual sentences, poetic sentences. (p. 32)

In a sense, what's happening with Burroughs and with Kerouac, the person has become a shaman, the body of the life has turned prophetic, and the message is coming through that body. (p. 191)

"O foot tired in climes so mysterious,
Don't go down the outside for nothing."
Kerouac, from Scattered Poems

"A lemon lot, and how's a man going to make a living with a gang like that?"
Kerouac

He [Kerouac]'s considered a naive or a primitive, but Kerouac had a better grasp on American manners and political manners than most writers..." p. 214

In terms of the popular culture, Kerouac was preternaturally brilliant and penetrant.  I think that's why the whole Beat Generation, beginning in the mid-fifties, had so much power.  Not that Kerouac was that smart, or Burroughs, but that what they were looking at was very basic and common sense.  American cultural mentality, media consciousness, Hollywood, radio, TV, the news magazines that intellectuals nourished themselves on were so shallow in their spiritual ambition that any basic statement, even if couched in bohemian terms, was a revelation.  p. 239

"In the Morgue" poem by Gregory Corso