“The Pickle of Surrealism” - Elegy for Toy Piano by Dean Young 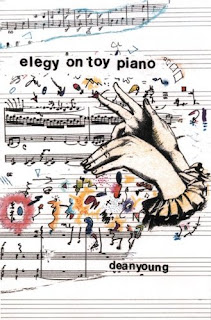 The hilarious, bizarre and delightful poems of American mock-surrealist Dean Young continue in his seventh volume, Elegy for Toy Piano. Dean Young himself does not seem to take the surrealist label seriously, but how could he? It’s self-negating to admit to surrealism, since it’s supposed to tap an unedited unconscious. As Young says in one poem, "All nonmigrating butterflies are surrealists, ditto third graders," and in another poem, “realism which is a form of surrealism on a time-delayed fuse.” How good is he? Pretty good – better, in my opinion, that Billy Collins, more ambitious and extravagant, yet inversely not as good as Kenneth Koch. The surface strangeness – a sensory overload associated with surrealism’s extreme clashing values, outlandish diction, dark humor, the nightmarish variety of dream logic of seemingly random images coalescing somehow – sometimes deepens upon re-reading the poem. Mostly, these are not poems that concretely steer you through life – ethical models, prescriptions of a mental or emotional life to lead – but they do steer you through the life of language they create.

But one of Young’s problems is appearing spontaneous while being rehearsed, the reason for the mock-surrealist label. As Gideon Lewis-Kraus puts it in his review of Elegy for Toy Piano, “Against Ponies, Against Airplanes” (The Threepenny Review, Summer 2005), “… what becomes central to Dean Young’s poems are the stolen moments of clarity in spite of this atmospheric surrealism…”

Of the volume’s title poem, “Elegy on a Toy Piano.” Dean Young has said, “I felt a great sort of, well, obligation, to write an elegy for Kenneth [Koch] when he died, and yet my aesthetic is based upon the obliteration and the disavowal of obligation, so you can see it kind of put me in a pickle.” (7/1/2005, Blackbird Reading, VCU).

“Elegy on a Toy Piano”
for Kenneth Koch

Necessary it is to love to live
and there are many manuals
but in all important ways
one is on one’s own.

You need not cut off your hand.
No need to eat a bouquet.
Your head becomes a peach pit.
Your tongue a honeycomb.

The injured gazelle falls behind the
herd. One last wild enjambment.

Because of the sores in his mouth,
the great poet struggles with a dumpling.
His work has enlarged the world
but the world is about to stop including him.
He is the tower the world runs out of.

When something becomes ash,
there’s nothing you can do to turn it back.
About this, even diamonds do not lie.

Let’s break down the pickle then: it’s moving, veering, complex, rhythmic, obscure and direct at the same time. That’s a pickle. There’s the repeated refrain “you don’t need” or “you need not” when the poem is part cautionary tale, a prescription on how to live. There’s the repeated “necessary it is to” clause. There’s one self-referential line to the act of writing poetry – “The injured gazelle falls behind the/herd. One last wild enjambment” – where the speaker broadens the meaning on a line-break to encompass the mystery and the suddenness of the moment of death. There is this startling penultimate stanza, that begins in the mode of confessional poetry, continues as platitude and ends with a reversal of the metaphor begun earlier in “Necessary it is to live to love,/to charge into the burning tower/then charge back out/and necessary it is to die.”:

Stolen moments of clarity appear most prominently in the many elegies and meditations on death throughout the volume: the title poem, “Little Black Squirrel,”
“Last Words,” “Interview,” “Ghost Dust,” and “May Deaths.” Then there are other, more inscrutable poems that have death-conscious moments inserted into the (otherwise) solidly discontinuous or surreal landscapes, like “Facet” or the following lines from “Ghost Dust”:

You there, I think I know you
or did once or someone who answered
to your name. We were inseparable
like two sides of a page on which was written
an argument against dust,
how everything becomes it.

In “Gray Matter,” a poem about the vagaries of human intelligence, its capriciousness, its random turnings and contradictions, Young rolls out unassociated thoughts and images in carefully understated syntax—the rhetorical tone created seems to knit together an argument:

Some part of me is disappointed
when the execution's stayed.
I say I want blue water
but I want everything muddy.
Maniacs trained as mechanics,
nymphs dashing through corporate plazas
like correction tape. Church towers--
what a good hiding place
for a slaughterhouse.
At the end of 4,000 years,
the scientists say into the cameras,
We've only been able to discover
15 ounces of decency, maybe more
in the future if the money keeps coming.
Then they turn back through the door
to the basement where the wine's kept cold
and children send each other on dares.
There are parts of the human brain
even carp spit out.

On a strictly surface level, the poem delighted me the first time I read it – I always knew I wanted “carp” and “human brain” to come together, but, until this poem, never knew how I wanted them to meet—but now, I thought, do they need never meet again? This is a drawback– the accidental random bizarre collisions and coincidences of these sentences and lines and poems are often only fresh the first time – they pall somewhat upon re-reading. It’s like, Well, now I know the joke, so from now on it will only be funny in a different, usually diminishing way. And when it becomes less funny, it often becomes less true at the same time—I fail to find a rising knowledge or deepening understanding left in its place, and find myself agreeing with William Logan who has written, “At best, Young’s poems mock themselves as well as poets of more serious temper. At worst, they’re the poems of someone who took a mail-order course in surrealism.” (“The Great American Desert,” The New Criterion, June 2005)

Still, Young seems to have grown wilder and more surreal: there is nothing here as straightforward as his accomplished confessional poem “The Business of Love is Cruelty,” from his second volume, Beloved Infidel (University Press of New England, 1992, reprint: Hollyridge Press, 2004), where the speaker explores his childhood memory of saying “I hate you” to his mother in an extended metaphor about playing with a Bride of Frankenstein doll. Since then, his line has become shorter, his enjambment more carefully planned, in the interest of punching up his rehearsed spontaneity.

Certainly Dean Young can sound like a fuller-bodied version of Billy Collins, as in the poem “Lives of the Veterans,” a fairly conventional lyric poem about the irony of history, that ends with the irony of future specter of WWII growing out of WWI. Like Collins, Young gets a lot of mileage out analyzing the mundane as if it were erudite and vice versa. In this poem, there’s an ordinary exposition of a time and place, and Billy Collins-like jokes about anachronisms

This was before television so folks
just looked into the fire and said
what they saw there for entertainment.

When a woman smoked, it was like
she was naked so that must have been fun.

Their doctors spent all their time
figuring out what was killing you
then killing you with something else.
No need for a lawyer.

But while Billy Collins hands you his meaning and his intention, calmly and quietly, and ties a bow on the end, like he was neatly returning something you originally owned, Young makes you try to catch a licking flame—it’s not possible, and you get burned, but something about the hardship and adventure of it changes you, and you can see for the first time, I know that fire.

One of my favorite poems is “Whoz Side U On, Anyway?,” a relentless explosion of inside jokes about critical schools of thought within the academy and a satiric convulsion upon the whole motion of academia. The one-liners build upon each other—

where some structuralists were saying
everything was a structure even your mother.

Meanwhile someone
messes up a bunch of packing instructions
and that’s pretty avant garde.

But then a whole class of poets
gets out of going to Russia through connections
and bands together to form the Academy of American Poets
to protest high dry-cleaning costs.

Then someone comes up with a book
that’s not even in words, publishes
20 copies on butcher paper and burns them
and that’s so fucking avant garde,
the sea floor rises 10,000 feet
and becomes a desert…

but even here, Young ends with a moment of clarity, a romantic image of true poetry finding its way into view despite the academic wars and the political shifts of aesthetic modes:

Hard
not to miss trying to slip a potent
image by the censors, some sort
of uplift in the end, a talking
rose or a kiss made of mist.

Perhaps the tour de force of the entire volume is the list poem “True/False,” an insanely interesting concept, a shopping list of 100 true/false statements, which was further strengthened by being rendered on a twenty-three foot long piece of accordion-folded paper by a fine arts press, a concrete example of surrealism visual art as well as poem. Some of the statements are funny, some of them are politically incorrect, some sequences of numbers work particularly well together, some are self-referential (like number 1 – “Usually my first answer is correct” – and number 100 – “The results of this test will be kept confidential). You can pick your own favorites, but I like numbers 39, 49, 53, 54, 58 and 66 (where he slyly inserts yet another of his stabs at describing the process of his own poetics):

39 Christmas lights are okay in Mexican restaurants year round
49 No one asked you
53 Stay out of Indiana
54 There’s a number missing
58 Criminals should not be allowed to lift weights
66 The meaning of every word comes from context and whereas context is created by other words, meaning can never be fixed but you can cross a stream on loose, slippery rocks without getting wet by keeping a strong, forward momentum.

Does Young’s work matter? He’s committed to his mock-surreal form, it’s not just a passing style for him, something he tries on and abandons, he runs all observations, voices, images, connections through the distancing, collage-like aesthetic of surrealism. His work matters as a continuing post-modernist corrective to several dominant, wearying strains in American poetry: the confessional school, the mystical-enviro school, the neo-formalist school.

Young’s poetry constantly force us first to believe that he has a subject or theme or narrative, and then to disbelieve it, and then to return to the poem and find all of these elements by the hard work of re-reading and singing and trying them on. He forces us back to his language and words alone, because he mostly takes us away any familiar context of a human relationship or situation. Young has said, “Without going too far down the aromatherapy road of experimental writing, we can still say that poetry in a fundamental way endeavors to make the reader a poet. ‘Tintern Abbey’ is a training manual. The song is always instruction in how to sing.” (Dean Young, “Necessary Privacy,” Poetry magazine, April 2005”). This implies that his poems depend upon readers to complete their creation, that the reader brings something to the comprehension of the poem that the poet cannot bring, and so makes of it something more than the words the poet put on the page.