Via Negativa by Daniel Hornsby 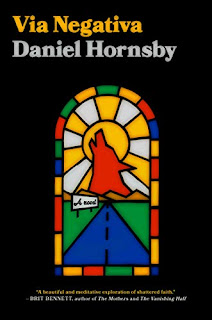 A "retired" priest drives across the country with an injured coyote in the backseat and buys a handmade gun made out of an animal skull.  Turns out he has vengeance on his mind. Makes it sound like an action-packed thriller, but instead, it's more of a meditative journey toward spiritual peace. Good, small, deep book.
at September 23, 2020 No comments:

Journey to the End of the Night by Louis-Ferdinand Céline 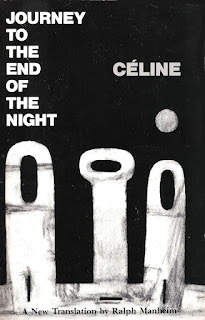 Chilling early scene, where Bardamu is alone on scouting expedition, and goes into the town where Germans have just attacked.  Goes to house where young boy has been stabbed and killer with saber, and mother and father are kneeling by bedside where boy's body lies, and all Bardamu cares about is bartering for a bottle of wine, which he pays five francs for, which is too much, he thinks.
First third of book is more rivetting: joining the chaotic French Army for WWI, a stint in rehab/mental hospitals, a harrowing journey to Africa for a turn as a colonial shopkeeper. When he returns to France, then to the NYC/Detroit, it fell off for me somewhat. Then the final third, back in France at the mental institution, picks up again.
But what a voice! I can see how it affected the Beats and American war novelists. Cruel, particular, self-lacerating, and endlessly dissatisfied. And the novel is loaded with aphoristic paragraphs. Forget quotable sentences!
[New Directions, 1983, trans. Manheim]
p. 4 - Love is the infinite placed within the reach of poodles.
p. 14 - When you have no imagination, dying is small beer; when you do have an imagination, dying is too much. 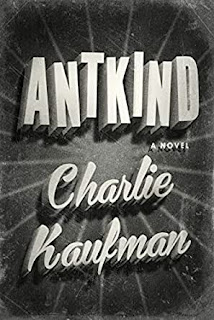