A Week in December by Sebastian Faulks 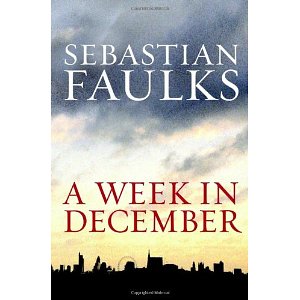 Mad talented writer, Faulks.  Tore through this novel of contemporary London -- the interlinked lives of a financial derivatives trader, a poor barrister, a working class young women who drives a subway train, a disgruntled youth flirting with Muslim extremism, an ignored teen from incredible wealth experimenting with drugs.  Not at all like Birdsong, Faulks' incredible WWI novel.  Not at all, but still wonderful, vivid, complete writing.  Each life he touches is more interesting that the last.  I'm so thankful for such wonderful, beautiful, talented writers -- and so annoyed, at the end of the day.  Highly recommended.

Birdsong: A Novel of Love and War by Sebastian Faulks 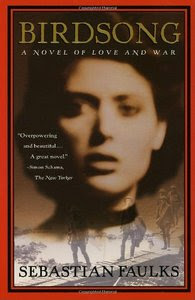 Don't know quite where to begin with this novel. Powerful, sweeping, moving World War I narrative, that begins with an ordinary provincial love affair in France in 1910, then jumps to the outbreak of the war, then jumps to 1978-1979, then jumps back again. Faulks prose is effortlessly detailed. Each character is fully believable. Heroism is undercut by cowardism and selfishness, which is further cut again with heroism and love.

The futility, horror and grand scale of trench warfare is rendered in an utterly personal manner: each soldier thinks he is doing something important and worthwhile, and each soldier knows with almost complete certainty that he will soon be dead.

Stephen Wraysford is a young Englishman who joins the army in 1914 and commands of a miner brigade. They tunnel beneath the German lines and set explosions under them. The underground combat scenes are incredibly brutal and disturbing. Stephen, rootless and exiled from home after a love affair in France before the war, becomes almost addicted to the danger and impossibility of surviving combat.

It felt as though she were being penetrated by a knitting needle with large walnuts midway up its shaft.

The supressed frustrations and unexpressed violence of his life were turned into hatred of the Germans.

"He's shouting for his mother," said the orderly as they brought him into the tent.
"They always do," said the medical officer, peeling back the field dressing Byrne had applied almost thirty hours before.

Then, as the fever in his abandoned body reached its height and he moved toward the welcome of oblivion, he heard a voice, not human, but clear and urgent. It was the sound of his life leaving him. Its tone was mocking. It offered him, instead of the peace he longed for, the possibility of return. At this late stage he could go back to his body and to the brutal perversion of life that was lived in the turned soil and torn flesh of the war; he could, if he made the effort of courage and will, come back to the awkward, compromised, and unconquerable existence that made up human life on earth. The voice was calling him; it appealed to his sense of shame and of curiosity unfulfilled: but if he did not heed it he would surely die.

Within minutes the hillside was seething with movement of the wounded as they attempted to get themselves back to their line.
"Christ," said Weir. "I had no idea there were so many men out there."
It was like a resurrection in a cemetery twelve miles long.

He heard nothing at first. Then, as the last pieces of displaced earth settled in the tunnel, he heard a long thick sigh; it was a sound he had never heard before, but he knew that it was the noise of several men expiring simultaneously.

The hedgerows were deep and ragged where he walked, covered with the lace of cow parsley. The air had a feeling of purity as though it had never been breathed; it was just starting to be cool with the first breeze of the evening. From the tall elms he could see at the end of the field there was the sound of rooks, and a gentler calling of wood pigeons close at hand. He stopped, and leaned against a gate. The quietness of the world about him seemed to stand outside of time; there was no human voice to place it.

Above him he saw the white moon, early and low above the elms. Over and behind it were long jagged wisps of cloud that ran in ribbed lies back into the pale blue of the sky, then trailed away in gestures of vapourous white.

Stephen felt himself overtaken by a climactic surge of feeling. It frightened him because he thought it would have some physical issue in spasm or bleeding or death. Then he saw that what he felt was not an assault but a passionate affinity. It was for the rough field running down to the trees and for the pathgoing back into the village where he could see the tower of the church: these and the forgiving distance of the sky were not separate, but part of of creation, and he too, still by any sane judgement a young man, by the repeated tiny pulsing of his blood, was one with them. He looked up and saw the sky as it would be trailed with stars under darkness, the crawling nebulae and smudged lights of infinite distance; these were not different worlds it now seemed clear to him, but bound through the mind of creation to the shredded white clouds, the unbreathed air of May, to the soil that lay beneath the damp grass at his feet. He held tightly on to the gate and laid his head on his arms, in some residual fear that the force of binding love he felt would sweep him from the earth. He wanted to stretch out his arms and enfold in them the fields, the sky, the elms with their sounding birds; he wanted to hold them with the unending forgiveness of a father to his prodigal errant but beloved son . . . nothing was immoral or beyond redemption, all could be brought together, understood in the long perspective of forgiveness. As he clung to the wood, he wanted also to be forgiven for all that he had done; he longed for the unity of the world’s creation to melt his sin and anger, because his soul was joined to it.