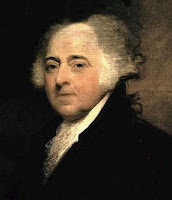 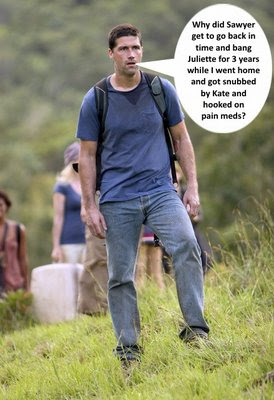 Why? Time travel has a way of snuffing out of the force of narrative. It makes a wimpy, whimsical thing out of causality, the "necessary relationship of one thing (cause) to another (effect)," and so on. It makes a racehorse plot into a silly flying horse: sure it looks cool, but it's hard to believe.

The actors look exhausted from the strain of so much explaining, too, as if they were also reading the crawl along the bottom of the screen of some episodes, where back-story is given "for those just tuning in." Right. Explain explain explain. Jack has lost all of his authority to Sawyer, who now runs the show. Sawyer looks exhausted by the sublime effort of making love to Juliet. Ben continues to be beat up by just about everybody in the cast, his face is always mangled, but no one has the good sense to kill him and end our misery. Hurley can't lose weight no matter how far back in time he goes. Kate looks continually peeved and sunburnt. I could go one, but why bother? This guy's got the whole annoying thing covered.
at May 07, 2009 No comments: