The Playboy of Hoboken 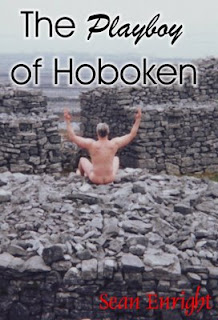 Sligo Crumlin, the American narrator of The Playboy of Hoboken, is in seclusion on the Aran Islands, pursued by an Irish gangster for a mistaken bad debt and stolen drugs. Sligo has come to Ireland for two reasons: to pursue a mysterious Irish girl, Maeve, whom he fell in love with in New York City, and to try to break through his writer’s block and write a play that reflects his own life and adventures but is still, somehow, interesting. Sligo’s narration is funny, irreverent, bleak and sincere, often in the same sentence. A 1980s misfit, he hates Ronald Reagan and grandiose prosperity, cadging drinks himself any place his friends bar-tend, living on a shoestring, depending on his mother for occasional cash handouts, meals and laundry services.

In New York City, Sligo and a group of his college friends have started the Tool and Die Theatre Company and are planning a series of showcase performances to raise money – a “subway series” of scenes from various plays to be performed on-train and in the stations of the #1 train on the West Side. Sligo thrashes about, trying to start to write a play, doing his moribund standup routines at a local comedy club, and then packing it all in to fly to Ireland and pursue Maeve. There he does begin writing his play – an updating of Synge’s famous play The Playboy of the Western World about an ordinary young man from the country who invents a heroic life for himself and gets an entire village to fall in love with him – as Sligo pursues Maeve, helps out her ex-fiancé in his chip-van business, and eventually flees from the dangerous Liam Lott.

From a folk festival on the grounds of haunted Charleville Castle in Tullamore, to a bloody face-off with Liam Lott among the ancient granite spars of a prehistoric fort on the Aran Island of Inisheer, Sligo perseveres. When he finally returns to New York City, he arrives home on opening night of the theatre company’s triumphant premiere of Sligo’s new play, based on his adventures in Ireland, called The New Playboy of the Western World. 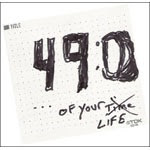 Paul Westerberg's newest release, 49:00, is a single (well, not quite) .mp3 file containing a dozen or so songs home-recorded and rough-mixed. (Westerberg plays all instruments: his young son adds vocals on the final track)He put it up on Amazon for sale for the price of either .49 or .99, depending on whether you added it to your shopping cart as a "song" or as an "album." Westerberg is reported to have said, "I figured about a penny a minute was what it's worth." One tends to agree with him. The initial .mp3 file was actually only 43:55 seconds long, and two weeks ago it abruptly disappeared from Amazon, and its place was a single .mp3 file of a song called, brilliantly, "5:05." (bringing the full release length up to 49:00: get it?) If it sounds like genius, or if it feels like rage, or it ends up being exhaustion, or laziness, or malice, you're probably having an accurate feeling. I started cutting up the original 49:00 .mp3 into songs but gave up after awhile: if Westerberg didn't care to, why should I? The first several songs are strongest: "Who Ya Gonna Marry," "To Be Risin'" and "Something in My Life is Missing," and the stand-alone "5:05" might be the best of all, but then it gets a little hairy (like most of Folker and Come On Feel Me Tremble, his most recent albums, which I didn't care for at all). With 49:00, all along the way, any time you start to get into a groove on something, it's liable to disappear into a hiss of overdubbed noise tracking or bleeds from other songs. That said, the production fits, and yet, and yet... almost everything about Westerberg's solo career continues to confound. As he himself once memorably sang, "Just add water - I'm disappointed."
at August 29, 2008 No comments: 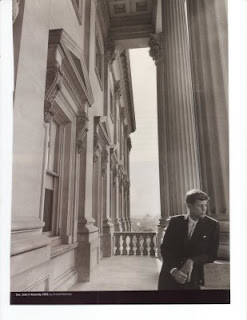 The Sunlight on the Garden

The sunlight on the garden
Hardens and grows cold,
We cannot cage the minute
Within its nets of gold,
When all is told
We cannot beg for pardon.

Our freedom as free lances
Advances towards its end;
The earth compels, upon it
Sonnets and birds descend;
And soon, my friend,
We shall have no time for dances.

The sky was good for flying
Defying the church bells
And every evil iron
Siren and what it tells:
The earth compels,
We are dying, Egypt, dying

And not expecting pardon,
Hardened in heart anew,
But glad to have sat under
Thunder and rain with you,
And grateful too
For sunlight on the garden.

Cocoon cocoon, have I come through too soon? 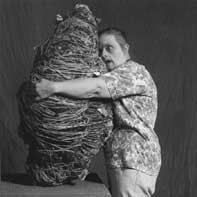 from Netherland by Joseph O'Neill: ... the deeper grew my suspicion that his work finally consisted of minting or perpetuating and in any event circulating misconceptions about his subject and in this way adding to the endless perplexity of the world. That puts very fine point indeed on what I wonder about at my most successful instants of writing or teaching or thinking -- that I'm stirring up what's already hopelessly mixed, that I'm obscuring the already-obscure. 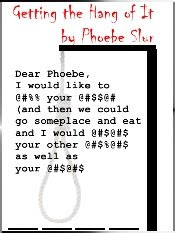 1. Alphonse Galway met Phoebe Slur at a reading in which they were both featured speakers. She was the only women under 60 in attendance, and wore a tight black jersey with the words Bone is bad printed on it in Chiller font. 2. He knew who she was, she did not know who he was, which was surprising. 3. They were both supposed to read for 20 minutes: he read for 18 and she read for 46. 4. Among the poems she read were “I’d Like to Pop Your Earhole,” “licorice, lavish, loutish”. 5. Among the poems he read were “1971” “1980” and “First Year.” 6. Alphonse had just won a chapbook contest for his thin volume of confessional verse which he wanted to entitle Greetings From Frontbutt, New Jersey, but which the publisher wanted to call 1971. Alphonse thought he could probably live with that. 7. Phoebe had earlier that year published an actual book of poems from an actual New York publishing house (no names but its initials were FSG) called Getting the Hang of It. Her poems consisted of transcriptions of letters she’d received from a man on death row in Houston. The letters were heavily pornographic and she had used a black laundry pen to censor the dirtiest words. 8. Alphonse’s favorite poets were John Donne, Andrew Marvell and Robert Lowell, Phoebe’s were Alicia Ostriker, Mina Loy, Cesar Vallejo and Amiri Baraka. 9. Alphonse couldn’t take his eyes off Phoebe: she had a flat steel stud in her upper lip and food in the corner of her mouth.

change is cliche perfecting itself

The Democrats are just silly looking. I know we're ascending. I'm glad. But still. The stage makes it seem like a great big people's church of cheering. Ted Kennedy sounded like he was going to keel over at any moment. [I have already been upbraided for this uncharitable remark about TK. I am a big fan, though, and he is clearly running on fumes. Perhaps I should have gone on to salute his heroism for even showing up, but that just didn't occur to me.]

9. Most of what looks like change is cliche perfecting itself.

Email ThisBlogThis!Share to TwitterShare to FacebookShare to Pinterest
Labels: politics

who wasn't born standing up? 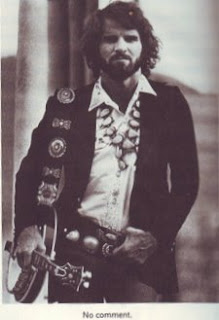 Three years ago I posted my first blog, about how I didn't understand blogging. That was also my last entry. But now I back. And more ignorant than ever. I'm rediscovering myself here -- I have a lot to talk about, and little regard for hearing back from people, and an urgent need to self-aggrandize -- isn't that the Blogger raison d'etre? But first! NOT writing for a while. The way people use blogging -- as a diary, for instance -- is just mortifying to me. I could never do it. Even mentioning elements of my personal life makes me shudder: they're so context-less, it's just words. So then, more words.

Steve Martin's book Born Standing Up is great (pictured above is a fantastic photo of him marketing himself as a hippy-friendly entertainer in the early 1970s - even the Eagles wouldn't have stooped to that odd shell necklace!) -- I hated his two novels, but heard great things about his play about Picasso -- this is a memoir of his standup years and it's concise, detailed and very funny. [CB Ed. Note: 8/28/08: Just finished. Not that good. Early stuff the best. "no comment" picture best thing in book.]
at August 25, 2008 No comments: