Nights at the Circus by Angela Carter 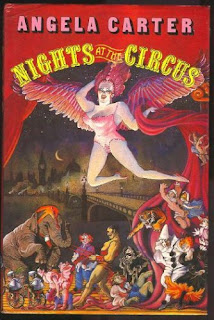 ...but it wasn't a good living, it was begging with paint on its face...

What is it this young man reminds me of? A piece of music composed for one instrument and played on another.

Have you ever stared stark failure in the face, young man? The trick is, to outstare it.

Another brilliant effort from Angela Carter from 1984.  A plot summary hardly helps:  in 1899 or thereabouts, a young American journalist journeys to London to interview the extraordinary Fevvers, a woman of prodigious physicality who sports two huge wings coming out of her back.  She is the star of an international circus, and the two continue on to Russia for a cosmopolitan tour, and then into Siberia. If that sounds good, it's about 2% of the story.  The depth at which Carter constructs her character, her effortless sparkling prose, her odd theme of feminist empowerment, the sheer Dickensian storytelling-within-storytelling:  she's amazing. 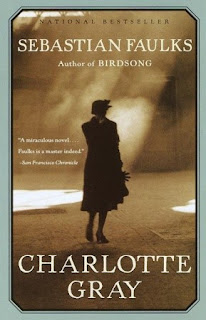 Trouble with reading Charlotte Gray was that I expected it to be an extension of Birdsong, Faulk's exceptional First World War novel. It's not, clearly -- it's about the Second World War and there's almost no battlefield action (while large portions of Birdson are literally in the trenches).  It's about a love affair between a young Scottish woman and an RAF pilot who goes missing in France.  The young woman resolves to find him.  And it's hard to put down.  But didn't destroy me like Birdsong did.

Note to self:  what's a "sprung floor?" Faulks uses the phrase at least a half-dozen times. ANSWER: a floor with some shock absorption, used primarily for dance floors or sporting facilities.

Just looked up the 2001 movie which got mostly negative reviews:  they significantly changed the end of the book, which is annoying.