Black No More by George Schuyler

Fascinating, funny, awkward and strange. Schuyler's 1931 satire of the Harlem Renaissance, American racism and white superiority is considered a vanguard in the field of Afrofuturism (although the term itself would not be coined for another sixty years. Max Disher, a black man, falls in love with a white woman at a Harlem nightclub. When she spurns him, his frustration leads him to a nascent medical technology, "Black No More," which turns black people into white people. Controlled, widespread topsy-turvy ensues. Now Matthew Fisher, he infiltrates a Klan-like organizaton (The Knights of Nordica) run by the woman's father, and eventually attains power and money, and marries the woman. Fear that their offspring will be "half-black" seizes him. That's just the basic plot. Nationally, the new technology wreaks havoc on American society; the South is ravaged by the disappearance of its black population, who flock to the new technology. The Northern cities's black commerce and industry are destroyed by the same. Politics is upended in the search for new racial scapegoats. It's funny - but not ha ha ha funny.
Schuyler, a prominent conservative voice, opposed the civil rights movement, and himself married a wealthy Texas white heiress. He was shunned by the black community.
Currently a musical is in production with music by the Roots' Black Thought.
Recommended!

Can You Ever Forgive Me? by Lee Israel 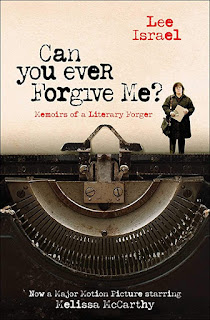 Email ThisBlogThis!Share to TwitterShare to FacebookShare to Pinterest
Labels: memoir 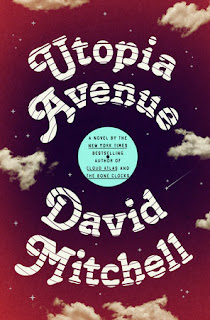 Disappointing. Not quite finished yet, but need to organize my thoughts. It's not the technical writing itself, which is terrific, and up to Mitchell's usual lapidary standard. It's not the internal lives of the four main characters, the musicians in the 1967 folk-rock band Utopia. There's Elf, singer/keyboardist, stuck in a troubled relationship with another singer. Dean, the bassist with memories of an abusive father and a mother who died early. There's Griff, the drummer, who loses his brother in a car crash. And there's Jasper, lead guitarist, possibly autistic and suffering from a schizophrenic condition of an inner voice - well, an inner knocking, that he can decode using an alphabet key.

Cool stuff, so far. As always with Mitchell.

It's the dialogue that I dislike. The band members in particular, always communicate in highly ironic, punning, and elliptical exchanges that don't ring true to me.

And though Utopia Avenue is an imaginary band, the rest of swinging London's psychedelic rock scene is realistically evoked: Brian Jones of the Stones, the band Traffic, Nick Drake, Herman's Hermits, the Byrds, the painter Francis Bacon, Rod Stewart in his Small Faces days. These characters also speak freely with the members of Utopia Avenue -- I find their presentation more authentic.
at August 12, 2020 No comments: