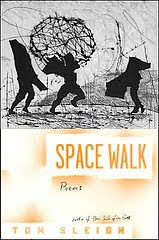 
Tom Sleigh’s invigorating new book continues his musical braiding of disparate lines of intellectual reflection. His taste for experience is healthy. There is a first-person tale of a trucker trying to deliver 91,000 tons of ice cubes. There is a creepy portrait of a writer now struck dumb by Alzheimer's and a three-stanza semantic house-of-cards riff on a sentence by Nietzsche. The specter of war hovers throughout the book, and Part II is devoted entirely to horrific images of the Iraq war.

In “Oracle” Sleigh combines autobiography and the life of the imagination. His family drives to a test of the booster rocket fuel his father is developing. Sleigh uses his customary extension ladder of independent clauses set off by colons to telescope thought after thought. First the father contemplates the engineering problem in his head during the drive, and then the setting broadens novelistically to include co-workers and the speaker’s brother, and the test firing of the rocket engine itself. Sleigh ends this section with a period, the only one he uses in a long poem otherwise dependent upon colons, ellipses and em dashes for pauses of various unconscious lengths. He challenges the reader by piling on the story: the speaker imagines the breakfast to come after the test, and then conjures a vision of his father—gone ten years—and the look on his father’s face when a friend visits him on his deathbed. The scope of the poem changes again, to imagine a September 11-like urban catastrophe:

The scales, weighing
one man’s death and his son’s grief against
a city’s char and flare, blast-furnace heat melting

to slag whatever is there, then not there –
doesn’t seesaw to a balance, but keeps shifting,

And the speaker draws the connection between the mentality of the 9-11 hijackers and his own father’s scientific mind:

the numbers calculated inside the engineer’s
imagination …

This is likened to a da Vinci sketch of a mortar invention and its explosive rainfall that he once shared with his father, the uneasy peace between the theoretical and the practical, the engineer’s civil scientific calculations and the war-maker’s use for them, the inflation of a two-dimensional drawing into a three-dimensional reality, another blueprint coming alive. Sleigh’s sentences unleash ambivalence, using logical parallel constructions to yoke together opposing images and ideas.

In “Space Station,” Sleigh sets the scene of a son, a mother, and their dog in an ordinary kitchen. Physical laws of the universe are suspended; gravity takes a hike, allowing the dead back in as well. Then new emotions are revealed:

What might otherwise feel like a science fiction convention becomes a momentary human transcendence, consciousness and empathy transferring between the speaker, his mother and their dog,

though only a dog
Who chews a ragged rawhide chew toy shaped
Into a bone, femur or cannonbone
Of the heavy body that we no longer labored
To lift against the miles-deep air pressing

We move from empathy with the dog, to the dog chewing a bone that might as well be human, which returns us to the initial setting and its suspense of gravity. Again, we are reminded of death. When the dog senses the dead father’s presence in the room, a long sentence takes over in the last three stanzas, re-ordering the flow in the transfer of thought, so that when the dead father “moving with the clumsy gestures / Of a man in a spacesuit” himself caresses the dog, gravity, mortality, and loneliness all return. Quite a movement for one poem!

In “Achilles Dream,” a version of Book XXII of The Iliad, the warrior is visited in his sleep by a vision of his just-killed comrade Patroclus, who entreats him to make sure he gets a proper burial, and that Achilles leave room in the urn for his own remains— Partoclus assures him that, he, too, will soon be dead. There are extraordinary passages early in the poem, where Sleigh shakes off the classical text itself and insinuates Achilles within a much more modern idiom, the first a view of Achilles sleepless and grieving on the beach:

if you’d been there
with a camera, if you’d taken his picture,
a cruddy snapshot snapped in bad light,
the flash giving his face the look of someone at a party
who holds a candle just under his chin,
that’s what you’d have seen:
eyes red,
face drained white; a shape blurry and huge
as an All Pro defensive end, a Big Daddy Lipscomb
crying out his eyes in desolation.

Big Daddy Lipscomb, a ferocious giant of man, practically invented the modern pass-rushing defensive tackle position, standing six foot six inches tall and weighing 300 pounds. He also was a “pro wrestler” in the off-season, but died young, at age 31, of a heroin overdose. Perhaps a modern Achilles. Certainly a vision of ferocity, fearlessness and vainglorious recklessness.

Sleigh does not address an audience as much as he interrogates his own experience, and interrogates the process by which we tie up or down experience in language. He thinks about life until he snags on language, and then he floats on the language he’s uncovered until it lands him back near life, always fluid and comfortable, a natural swimmer, and easy enough to follow if you don’t mind going without breath for long periods of time. If there are any weaknesses in the poems, they are failures of complexity and ambition, but the beautiful music of his complex meditations is never absent.

Music of thought requires more time from a reader than the music of speech: its greatest reward is cumulative rather than discreet, a developed rational song that pierces the noise of the world. So even when Sleigh meditates in a poem about the despair and omnipresence of a distant war (“The Breeze”), he can still wonder at words that have somehow over time been given “repletion and ardor.”