Out of the marvellous

I'm writing a review of Peter Cole's book of poetry, Things On Which I've Stumbled, and just came across this poem, “The Wrong Angle Righted” about searching as a child for a "skyhook." This is an old scout trick – I myself looked in vain for a "left-handed wind-strainer", the younger boys being sent out by the older ones to search for a gadget that doesn’t exist.

He’d point, and we’d trudge on, grumbling,
in search of that wondrous device,
the last word in wilderness dwelling,
which would make for us that immaculate crease

and yield, over our heads, a prize ceiling –
that weightless, matchless, unnerving and skyey,
legend-like feeling of being,
a last, held up from on high.

Something about the lines above remind me of the striking Seamus Heaney poem in Seeing Things (1993), about the men sailing in the boat in air.

The annals say: when the monks of Clonmacnoise
Were all at prayers inside the oratory
A ship appeared above them in the air.
The anchor dragged along behind so deep
It hooked itself into the altar rails
And then, as the big hull rocked to a standstill,
A crewman shinned and grappled down the rope
And struggled to release it. But in vain.
`This man can't bear our life here and will drown,'
The abbot said, `unless we help him.' So
They did, the freed ship sailed, and the man climbed back

Recently saw this, the full-length Superman movie that come out of the TV series, for the first time in, oh, call it 35 years. Saw it with the kids: they were as creeped out by it as I was way back in 1973. Dismal lighting values and a cheap creepy soundtrack are all it takes, people, take it from me. The racial edge to the film -- the townspeople rise up in full riot configuration, with guns, chain, broken sticks, pitchforks, even BARBER POLES. and rush off to annhiliate the thus-far harmless, tiny, if odd and furry, Mole-men -- is pretty sharp for the early fifties. That's clearly what they are going for, and it's highlighted by the absence of anything other than white actors in the production. 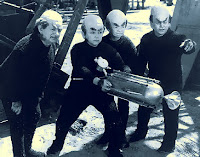 Email ThisBlogThis!Share to TwitterShare to FacebookShare to Pinterest
Labels: TV

Barbara Jordan, We The People

The amazing sound of Barbara Jordan's voice during the Watergate hearings. She struck me then and she strikes me now. Robert Pinsky has a strange, wonderful, strong, confusing poem about her.
On "Eve Tempted by the Serpent" by Defendente Ferrari, and in Memory of Congresswoman Barbara Jordan of Texas. It begins like this:

Rare spirit remembered with a pang
Of half forgotten clarity or density
A quality, quilled, a learned freshness

Unshattered though not perfect not Eden
No rippled meander through new islands
The parentless leaves and branches tender...

and then, at very end: