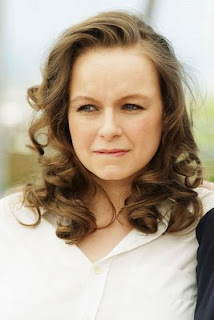 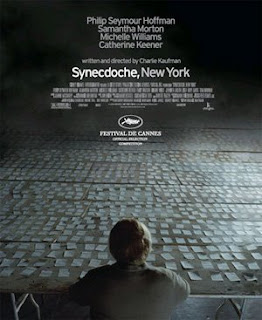 Das Truman Show. At a bit over two hours it's too long, that's for sure, there's an awful long soft middle to the film, which is where it tries hardest to become a German film, but then it's back to the hard wrap and American time again. After reading so many advance comments on the film (when it was still being post-produced), and then advance reviews, I thought I was fairly clear on the plot, and the whole constructing-a-small-scale-but-complete-model-0f-all-of-Manhattan, but the reviewers must have picked up all of that from the advance material distributed with the release, because if you didn't know that was coming, it would take you the soft middle -- about 75 minutes -- to figure it out, that the director (Hoffman) of the play was now directing not just his entire life, but all of existence. (Well, he goes abroad briefly to Germany, to try to see his lost child Olive, and that part at least, seems to be "off screen.") I can bitch and moan -- and will, if I find the time to go back and review it act by act, but it's a fairly extraordinary film nonetheless. There are some great performances (Hoffman, de rigeur it would seem at this point in his nearly faultless career), Samantha Morton, Emily Watson (small part but great) but then there are a million other actors who seem to be as confused as I was. The movie is about ideas, the movie is an idea, and although the vision is not seamlessly revealed to us, it's pretty powerfully delivered in part.

Sean,
Just browsing through your site. It's Joe Gaines from Gonzaga. Same class as Mike.
I am happy to see you persuing the literary outlets of your life. You struck me in high school as someone comfortable with words and in touch with your funny side.
Good luck. I'll step inside every once in a while.