A History of Cereal and Violence 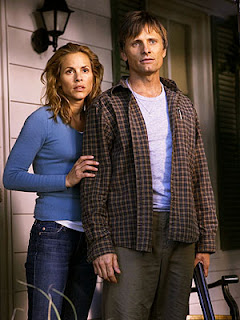 Behind the times, as usual: just saw the sort-of gripping movie A History of Violence, which actually feels like a graphic novel without resorting to any animation whatsoever. Over the years, I'd seen the preview so often -- the loaded momentary truthfulness of Viggo Mortenstern's innocent life, the heavy foreshadowing (Ed Harris' scarred face and destroyed eye) that maybe old Viggo weren't so nice -- that I felt like I'd already seen the movie. Still, it's not far from being a pretty good movie -- how faintly can I praise it? Certainly, the sex scene with Maria Bello on the stairs (the two people I mentioned the movie to immediately referenced that), not to mention the 69 scene with her in a cheerleader outfit, are outstanding, and easily made the movie half its money. But what about the cereal box in several intimate breakfast scenes? I'm talking, of course, about Honey Bunches of Oats.

Why is Honey Bunches of Oats featured in at least two breakfast scenes? I can't think of a gentler cereal, it's almost Shakespearean in its sweetness:

Nay, though thou would run with me,
run down through thorn-scored hayricks in the crick,

shall I roll with thee in pearled honey bunches of oats.