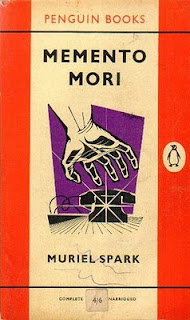 The central plot element of the novel is an anoymous caller who telephones each of the old people at one point or another to tell them, "Remember that you must die." The police are called in, and various theories about the identity of the caller are propounded. But his voice, accent, age and inflection differ for each person; he seems to know where each person has recently been, and so the wise (and elderly) former detective on the case, by novel's end, is forced to surmise that the caller is Death himself.