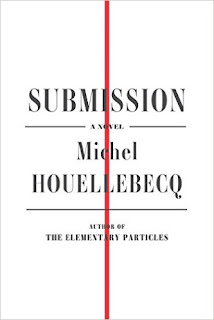 Interesting, if academic and insular, French novel about a France of the not-distant future that has been politically taken over by a Muslim majority, and changes its culture to reflect that: women cannot work and must be veiled, men can take multiple wives, conversion to Islam helps one in professional advancement.

The narrator, a 40-ish French academic whose speciality is Huymans, spends most of the book in intellectual musing and conversation with other scholars about the political history of  France, and its literature.

It's satiric, in that the narrator is a narrow, selfish, bourgeois most interested in lazing about and having sexual one-off liaisions, and finds himself gradually drawn into Muslim conversion himself, when he realizes it suit his rather self-centered, sexually rapacious lifestyle.

In the article for Oumma, Rediger raised the question whether Islam had been chosen for world domination.  In the end he answered yes.  He hardly bothered with Western societies, since to him they seemed to obviously doomed (liberal individualism triumphed as long as it undermined intermediate structures such as nations, corporations, castes, but when it attacked that ultimate social structure, the family, and thus the birthrate, it signed its own death warrant; Muslim dominance was a foregone conclusion.