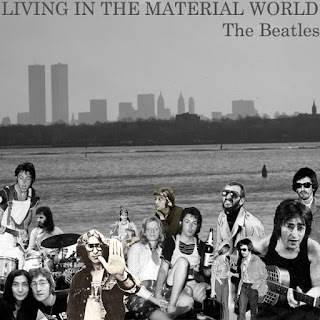 Genius idea this guy had -- create "Beatles" albums for each of the first five years after the band broke up, using selections from their solo releases to build a full 12-15-track album.


It's fascinating, and entertaining, for me, because although I'm a fan of many of those tracks individually, almost none of the solo albums from that period are compelling.  Why?  No one wanted them to be solo.  All the music they released was judged against the Beatles' recordings, an impossible standard to live up to.

On the impossible albums, though, hearing the band members next to each other song after song, is reassuring and creates a more favorable listening experience. Their four voices (or three and a half) in any order were a sublime chorus -- the whole was in fact more than the parts.

He even writes alt-histories of the band for the years covered, where they toured, how the band continued on, the conflicts and successes.

Their last couple of Beatles albums, they were already separating, but continued to play on each other's tracks.  Like a member of the legendary 1985 Chicago Bears football team once said, "We were a dysfunctional family, but as long as we stayed together, we were fine."