The Mirror and the Light by Hilary Mantel 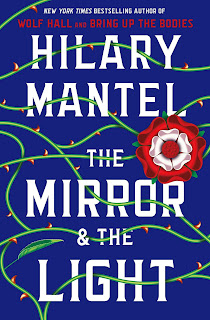 Took me a month and two days to finish reading this final installment in Mantel's WOLF HALL trilogy. It was good even though I don't recall the first two books in any detail, and all the history is brand new to me. But man, was it long. 750 really thin pages.

In Wyatt's verse there is a tussle in every line. In the verse of Lord Thomas, there is no contest at all, just a smooth surrender to idiocy.

... he will try to return the poems to their owners... where they will be giggled at by whores, and used to wipe their arses. When he gets home he says to Gregory, 'Never write verse.'

[instructions to Bible printers] The trick is to get them to set the line right to the edge of the page. It does not make for good appearance, but no white space means no perversion by marginalia.

To counterfeit a merry mood
In mourning mind I think it best.
But once in rain I wore a hood
Well were they wet that barehead stood.

'What should I want with the Emperor, were he emperor of all the world? Your Majesty is the only prince. The mirror and the light of other kinds.'

Can you make a new England? You can write a new story. You can write new texts and destroy the old ones... You can write on England, but was written before keeps showing through, inscribed on the rocks and carried on floodwater, surfacing from deep old well.  It's not just the saints and martyrs who claim the country, it's those who came before them: the dwarves dug into ditches, the sprites who sing in the breeze, the demons bricked into culverts and buried under bridges, the bones under your floor. You cannot tax them or count them. They have lasted ten thousand years and ten thousand years before that.

When he was an infant, his sister Kat used to tell him the bells made the time. When the hour strikes, and the music shivers in the air, you have the best of it; and what's left is like a sucked plumstone on the side of your plate.

He yawns. But speaks to himself: you must not be tired. If a man should live as if every day is his last, he should also die as if there is a day to come, and another day after that.