The Bushwhacked Piano by Thomas McGuanebath 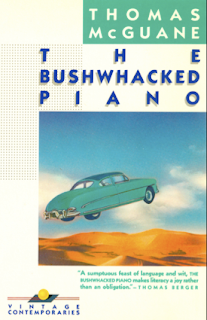 There was nobody here to make him see the world as a mud bath in which it is right tough to keep showing a profit. He invented a joke to the effect that blood was always in the red and death was always in the black; and thought: What a great joke! (35-36)

In the past, he had run up and down America unable to find that apocryphal country in any of its details. His adrenalin cortex spumed so much waste energy that a lot of amazing things happened. And he deliberately changed his highway persona day by day; so that, across the country, he was variously remembered for his natty dress, for his opposite of that, for his persistent collection of “data,” for his arbitrary and cyclonic speechmaking, for his avowed devotion to his mother and father, for his regular bowel movements, for his handsome rather loosely organized mock-Magyar face, for his tiny library and transistorized machines locked away in ammunition tins, for his purported collection of the breakfast foods of yesteryear, and for his habitual parabolic coursing through the U.S.A. with attendant big trouble, pursuits and small treasured harbors of calm or strange affections along traveling salesman lines, facing enemies with billboard-size declarations of a dire personal animus, cluttering hundreds of small midland streets with regrettable verbs and nouns, sharp ones, heavy ones and ones which made barricades and tanktraps in peaceful summer villages where no one was asking for trouble.

In most ways it had been an awful strain, one he’d been glad to finish. Now, being on the verge of it again, he felt an uproarious tension in his mind. (40-41)