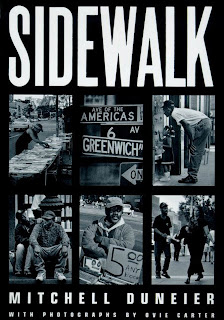 Another fascinating urban ethnographic fieldwork study by my old college chum Mitchell Duneier. He spends several years among the sidewalk magazine vendors on Sixth Avenue in Greenwich Village, NY, delving deeply into the culture, commerce and psychology of the mostly "unhoused" African American men who created a micro economic ecosystem in order to maintain their own self-respect.

To be sure, there are some "broken windows" on these blocks. But mostly there are windows that look broken to people who are just passing by. Because Americans ruthlessly use race and class categories as they nagivate through life, many citizens generalize from the actual broken windows to all the windows that look like them-- and assume that a person who looks broken must be shattered, when in fact he is trying to fix himself as best he can. Only by understanding the rich social organization of the sidewalk, in all its complexitiy, might citizens and politicians appreciate how much is lost when we accept the idea that the presence of a few broken windows justifies tearing down the whole informal structure. [315]