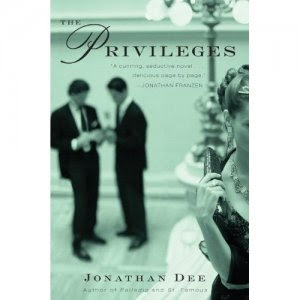 So I get the new one finally and I'm in a tizzy of anticipation, glancing at it on my nightstand, dutifully (and happily, if in a hard-working sort of way) finishing David Mitchell's stunning Cloud Atlas before I dig in. And The Privileges is a good read, compelling, and Dee once again makes several uber-rich lives somewhat transparent to me and interesting, but on the whole the new one was a disappointment, second half of the book never really delivers on the thesis grandly contstructed in the first half -- that is, a successful couple, I mean so successful that in the second half of the novels pedestrian details like actual numbers of dollars and how many millions have vanished completely , a successful couple (and their couple of somewhat less successful, if gorgeous, children) will have to eventually pay the piper in some fashion for all their success. They don't pay. The wife's father dies, the husband blows out his knee during one of his fanatical workouts, they must stand by their daughter after she is in a bad car wreck where some people apparently die, after partying for several days and nights with her at one of her family's many luxury homes, and the son is held hostage by an "outsider artist" he is considering promoting. (I'm not making that outsider artist bit up, though it sounds like I am.