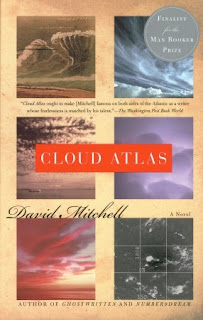 Cloud Atlas is a tour de force. A lengthy "novel" consisting of six novellas that move chronologically from the early 19th century to the distant post-apocalyptic future in the first half of the book, then reverse and run backwards in time in the second half (from p.a. future to 19th century, so we end where we began), and which six novellas are linked with what at first seem to be casual coincidences (the diary chronicling a sea voyage in the first novella becomes a tattered rare book that a young composer in the 1930s finds and reads in the second novella, a piece by the young composer is heard in the third novella), it as ambitious and experimental and daring as it is compellingly and closely written in each of the six wildly-different narratives.
at July 12, 2010

Wow. Per your recommendation, I just finished devouring this amazing book.

OK - I admit it - I cheated. I read the five interrupted novellas all of a piece -- because DM's cliffhanger endings demanded it. Just don't have the strength to delay my narrative gratification.

And this is what I most loved about the book -- despite his artsy-fartsy (and rather arbitrary?) structure & "literary" ambitions, DM tells six great stories, rife with incident and narrative drive, which satisfy all by themselves -- and only more so when you read the six together.

In fact, Cloud Atlas contains my favorite 19th-century exploration narrative of all time, and one of my favorite early 20th-c epistolatory novels, late 20th-c detective novels, and early 21st-c apocalyptic sci-fi novels. All four styles are improved by being compressed into novella form, and I recommend this book heartily by saying it's six, six, six good books in one (and 4, 4, 4 great ones) -- so it's a reading bargain. It's like reading Melville, Waugh, John &/or Ross McDonald, Kingsley &/or Martin Amis and Ray Bradbury all in one.
I am green with envy of Mitchell's genius, yet somehow this didn't stop me from loving the book & swallowing it whole (500+ pages in 3 days), so he must be good. Thanks for the tip, Seana.

What a wonderful, succinct reading, Steve! I finished the book with one regret: that I hadn't read it as you read it, skipping the interlocking (which is a stretch) and just gobbling up the complete novellas, each one seemingly better than the one before. I so admired the ambition (if not the execution) of his concept -- the idea of past lives and reincarnation, the generational growth of the SAME character -- brilliant, brilliant, although it doesn't really pan out. I think I like the composer novella the best of all, but also liked BOTH science fiction ones alot. I meant to revisit my original post - I had in mind a blistering (if short) response to several critical reviews of the novel that I read, that pooh-poohed his ambition while admitting the guy is clearly a genius. I'm hopelessly naive (amateurish? dilettante-ish?) about fiction -- the thought of the author making such a something out of nothing -- even if there is a flaw in the overriding concept -- far outweighs my feeling that the connections don't work at all as well as the individual novellas. Bravo to you for tackling it, too -- it's a meaty volume.