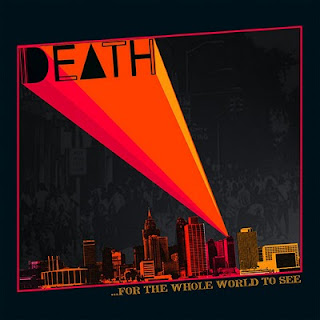 Sheesh. Great lost Detroit black punk band, who recorded seven singles in and around 1974 with the help of Funkadelic producer Don Davis, who must not have done much but turn the recorder on and let it bleed. Certainly some MC5 ringing in their ears, little Stooges, not much metal in the fast stuff but some in the bluesy slower stuff: the tremendous thing about these songs is not who they sound LIKE, but who FOLLOWED them and sounded like them. Particularly the Bad Brains, who either listened to this in their sleep or are these guys children. The stuttering drums, the crushing guitar riffs, the simple-as-brain-damage refrains, the dum-dum-bullet-stupid bass: I'm such a troglodyte at heart! "Keep on Knocking" is the standout, but "Rock n Roll Victim" is the Bad Brains-ish one for sure. Love the songs, love the narrative (brought to me, pathetically enough, by a New Yorker article about them this week. But it made me crank some Bad Brains for the wife, and we thought we were hearing some lost Kiss or some neanderthal Van Halen for sure. For thor's sake buy it (not that I did) and give the guys some money after all these years.
at July 30, 2010